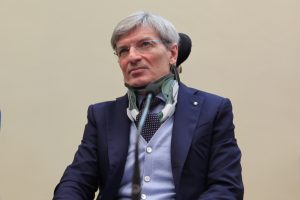 From 1988 to 1993 he worked as medical doctor authorized to practice General Medicine in the area of Dorno – Pieve – Albignola – Scaldasole – Valeggio.
After a series of important experiences, he became Oncology DH of the Scientific Institute for Research, Hospitalization and Healthcare “Fondazione Salvatore Maugeri” in Pavia. 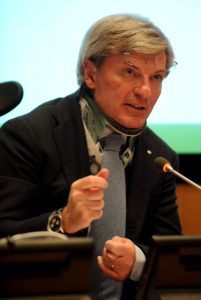 In 2003 he was diagnosed with Amyotrophic Lateral Sclerosis.

During his career, he has also held important political assignments, working as a Councillor for Health, Industry, University, Research and Open Innovation of the Lombardy Region.

He has also been Director of the complex structure of continuity of care hospital-territory of the Niguarda Ca ‘Granda hospital in Milan and Director of Health Planning and Development of Lombardy Regional Plans.

From 2007 to 2016 he has been the Scientific Director of the Clinical Center of Serena NeMo (Center for diagnosis and treatment of neuromuscular disease).

In January of the same year he became General Director of AIFA (Italian Medicines Agency).

In 2017, he has been awarded the honor of Commander of the Order “Al Merito della Repubblica Italiana”, Mario Melazzini has written several books on his experience as a doctor and as a patient.